Grassland ecosystems are widely spread in the (pre-)alpine areas of southern Germany and cover more than one third of the agriculturally used land in Bavaria. Grasslands are highly relevant as they provide fodder for dairy and cattle farming and support other important ecosystem services such as the storage of carbon and nitrogen, water retention, protection against erosion, and the provision of habitat for biodiversity. However, grassland ecosystems are threatened due to land-use intensification, land abandonment, the conversion to cropland, and climate change. Thus, one of the main challenges is the identification of sustainable grassland management strategies that guarantee the long-term provisioning of important ecosystem services under climate change.

For this purpose, we developed a bioeconomic model (Figure 1) that calculates available organic fertilizer based on cattle numbers and its distribution on cropland and grassland fields according to specific management rules. The model then determines the long-term effect of this management on selected biophysical variables (e.g. yield, C/N dynamics, N losses) under different climate scenarios. 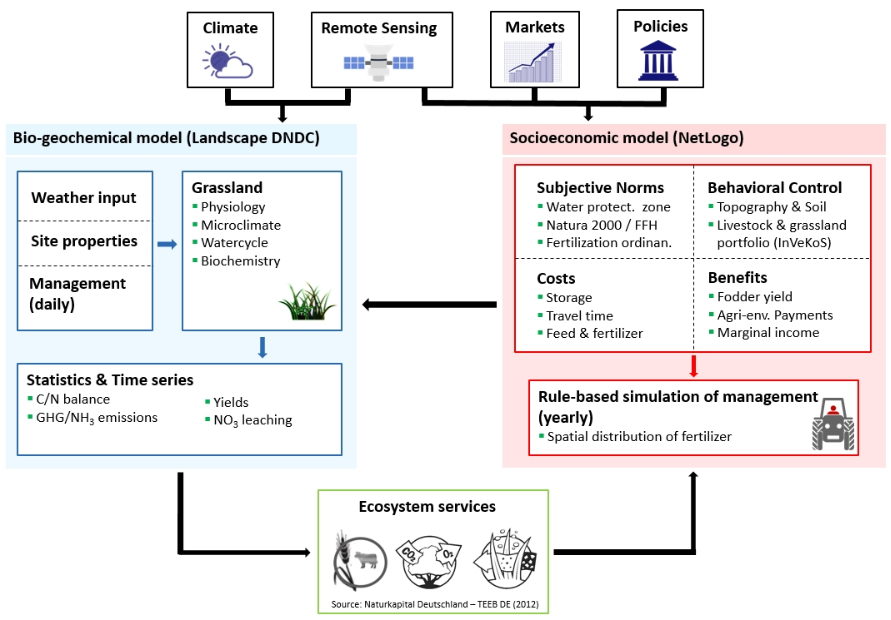 We also conducted surveys with farmers and citizens to investigate perceptions and values of ecosystem services provided by grassland as well as farmers’ management considerations. The surveys were conducted at the Offices of Agriculture in Weilheim and Bayreuth during application phases for subsidies. Citizens received postcards with an invitation to an online survey. The surveys included both quantitative and qualitative questions and took approximately 15 minutes to be completed.

A first version of the model has been applied to a (pre-)alpine case study in southern Bavaria, Germany – an area with a large proportion of permanent grasslands that are mainly used for dairy production. First results show that for the current situation, N requirement of modelled grasslands does not exceed the maximum allowed amount of organic fertilization (i.e. 170 kgN/ha) and can be covered by available organic fertilizer from cattle farming. However, in light of climate change, grassland productivity is expected to increase in specific areas opening up the potential of careful intensification and allowing the reduction of management intensity at other sites that will become less productive.

The surveys reveal an overall high agreement that ecosystem services of grasslands are very important, except the production of energy plants. We also identified differences and synergies between the different actors. For example, farmers place higher importance on fodder production than citizens who see a higher relevance of grasslands for recreation than farmers do (see Figure 2). 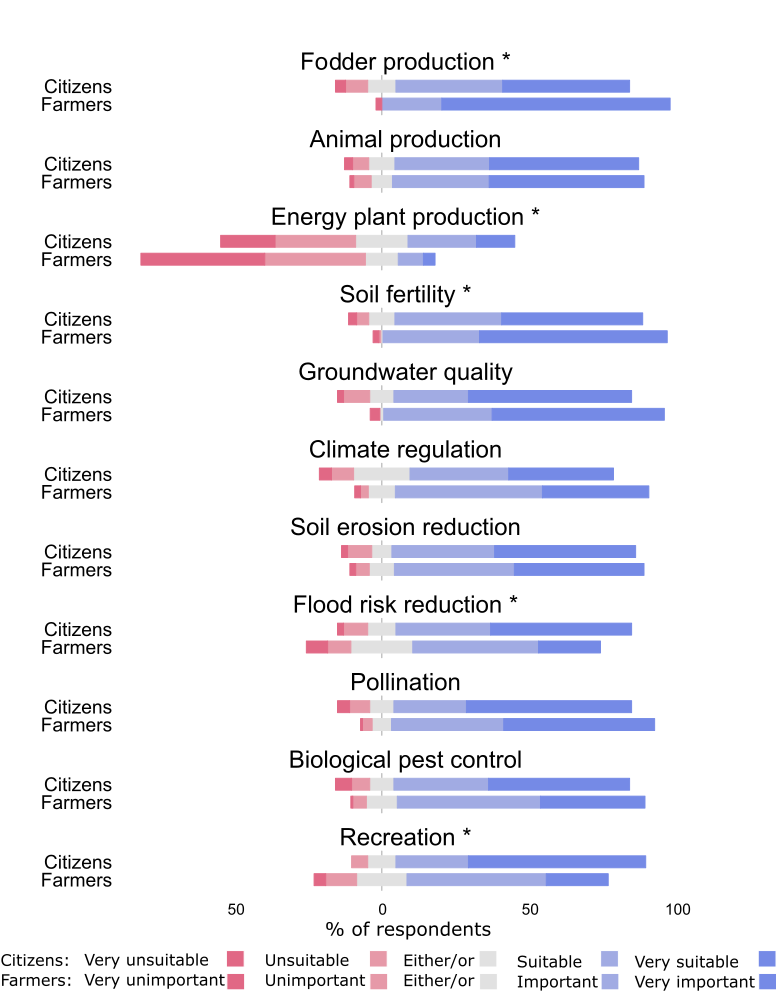 The model has benn validated by experts and results of farmer surveys at different stages. Next to analyzing the effects of climate change and management on grassland ES, it can be used to test innovative policy measures (e.g. changes in the fertilization ordinance). The interdisciplinarity of the model together with the strong focus on stakeholder integration can help identifying policy-relevant management options that are suitable for real-world implementation. Further, it provides an example of how a socioeconomic agent-based model can be coupled with biophysical models in order to consider the multiple facets of land management within a single modelling framework.